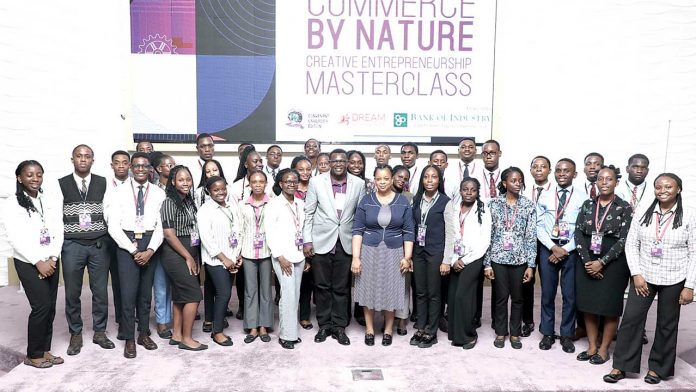 The Bank of Industry (BoI) is partnering with Dream Advantage to train Nigerian youths to maximise education for product invention and economic creativity. Dream Advantage is a human development agency that is into activating the innate, creative potential of Nigerians.

On its stable, are several human development books authored by the Chief Creativity Catalyst (CCC) of Dream Advantage, Samson Adah Paul. They include Nigerian Dream, Back to Sense, God of Industry, Creative Control, Dream Vacancy, and Atomic Knowledge, which was adopted as a mental development textbook for Covenant University students.

The bank by the partnership is sponsoring students and youths to undergo bespoke creative training aimed at whipping up their innate capabilities.

At the pilot edition of the programme, which was hosted by Covenant University, Ota, Ogun State, some undergraduates of the institution benefitted from two courses – Commerce by Nature, and Mindmatics Intellectual creativity course.

The CCC of Dream Advantage, Paul, in his remarks during the Commerce by Nature Masterclass said: “Slavery was not completely abolished; it was plantation-farm slavery that was abolished. Africa’s marketplace is now filled with more slaves than the slaves that were engaged to run the plantation farm of colonial slave masters. Indeed, the African marketplace is filled with entrepreneurs that are ‘house-maids’ to the vision and productivity of the players in the foreign marketplace.

“The fact that Africa’s raw materials remain the only thing that foreigners buy from Africa is proof that the continent’s marketplace is filled with captives of industries. African entrepreneurs will become captains of industries when they develop creative mastery by which they will begin to produce world-class finished products that foreigners will patronise. The primary resource that makes a man operate as a captain of industry isn’t money, it is rather a vision,” Paul said.

He continued: “Vision would make a man step up to produce vanilla garri, strawberry garri, and chocolate garri. It is indeed the lack of vision that has caged men to producing just a type of garri. Vision isn’t about having a plan for something; vision is rather about having a unique insight for a venture. Without vision, a man will indeed end up as a captive of industry.”

Paul, who described marketplace product-vision advantage as one of the primary course outcomes of Commerce by Nature, said that the “Bank of Industry’s partnership with Dream Advantage will empower Nigerian youths to overcome ill-literacy, which is a greater menace than illiteracy. While illiteracy is the inability to read and write, ill-literacy is the inability to think, create and serve.”

He further stressed that the partnership with Dream Advantage will empower Nigerian youths to develop mastery for creative-entrepreneurship, which will transform the youths to become product creators entrepreneurs, rather than money hunter entrepreneurs.”

The Vice-Chancellor of Covenant University, Prof. Adebayo H. Abiodun, in his opening remark noted: “Covenant United is delighted to have been selected to host this event, and I wish to appreciate the facilitators of this training, Dream Advantage, as well as the sponsor, the Bank of Industry for partnering with the university towards the attainment of its vision. I also congratulate the participants for this unique opportunity, and urge you to exploit the benefits of this training.”

In her address, Mrs. Mistura Johnson, who led the bank’s delegation said: “The Bank of Industry’s mandate is the transformation of Nigeria’s industrial sector, by providing financial and advisory support for the establishment of large, medium, and small project, enterprises. Nevertheless, the Bank of Industry has a passion for the youths. This is the reason it has resolved to partner with Dream Advantage to sponsor Nigerian students/youths to undergo the Commerce by Nature Masterclass, and Mindmatics Masterclass, both anchored by Dream Advantage.”

One of the participants, Miss Ifi Favour Ogochukwu, in her remarks said: “I thank the Bank of Industry for this, I also thank the course instructor, Samson Adah Paul for this masterclass. I knew what to expect, but without any doubt, this did beat my expectations hands down. As an engineering student, gaining mastery is a bit vague; but I can say for sure that I have got clarity on quite some things, both in engineering and other aspects of my life.”

Miss Gloria Ayeni, another participant affirmed: “This class is like nothing I have ever been to before. I have been to many entrepreneurship workshops, but this one has been very different and very insightful. The lecturer spoke in a way that I have never heard anybody speak about creativity and entrepreneurship.”