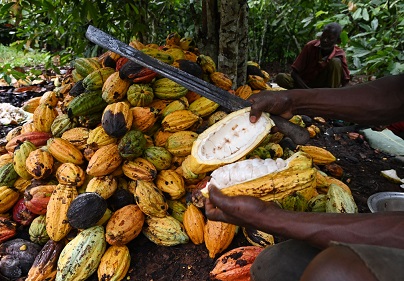 The Central Bank of Nigeria (CBN) has commenced the distribution of inputs and cash worth N770 million to 221 cocoa farmers in 10 cocoa producing states of Nigeria.

The distribution of the items was flagged off in Akure, Ondo State capital, under the CBN Anchor Borrowers’ Scheme to members of the Cocoa Farmers Association of Nigeria (CFAN).

The distribution statistics, also indicated that each farmer would get 300 sachets of Ultima Plus, 12 litres of Clear weed herbicides, nine litres of Avesthrin insecticides six litres of Folar cocoa fertilizer and cash.

The Anchor Borrowers Scheme for Cocoa farmers is being managed by Wema Bank Plc, in which all beneficiaries, have opened account for the purpose of the loan scheme.

Speaking at the ceremony attended by representatives the cocoa farmers from the beneficiary states and stakeholders in the cocoa value chain business, the National President of CFAN, Mr. Adeola Adegoke, said the CBN assistance would lead to increase in the yield of farmers per hectre.

Adegoke, said the sum of N197,444 was being given out as loan per hectare, and three hectares are calculated for each farmer, through the Anchor Borrowers scheme.

He added that the loan attracts a nine-per cent interest rate payable within 18 months and that it was expected that the loan, tagged: ‘Good Agricultural Practices,’ would increase beneficiaries’ productivity from about 350kg of cocoa beans per hectare to about
600kg.

While stating that this is the first Anchor Borrowing Scheme for cocoa farmers, Adegoke said the leadership of the CFAN , should be commended for the scheme.

He said the scheme was not for beginners in cocoa farming, but for those, who already have their farms and want to increase their yield.

Adegoke urged the federal government to assist farmers in sinking boreholes in farms for irrigation, adding that Nigeria can no longer depend on rainfall farming.

Supply Chain 4.0 – What is next for digital solutions in...