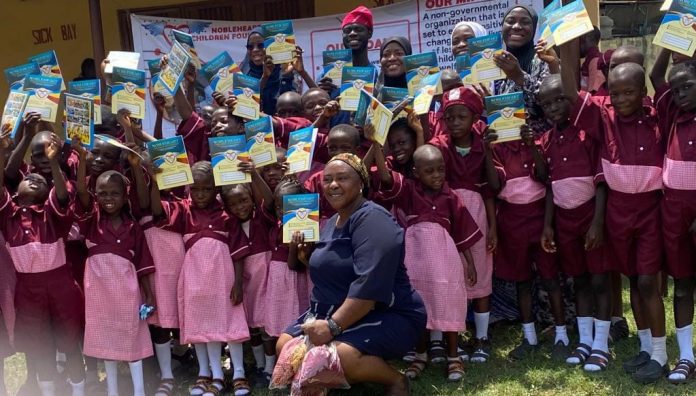 NobleHeart Children Foundation (NobleHeartCF), a non-governmental organization in Lagos, Nigeria on Monday distributed free school uniforms, sandals, underpants and undervests, and school socks to school pupils in Lagos State to commemorate children’s day 2022 and to mark the first phase of ‘Dress A  Child’ initiative for year 2022.

‘Dress A Child’ is one of the annual flagship projects from the stable of the foundation which seeks to the cater for the educational and socio-economic wellbeing of indigent children in public primary schools, by providing basic school needs to them and ensuring that there economic status does not affect their education due to lack of these basic items.

In this phase, upto 500 materials were shared with Pupils of  Rabiatu Thompson Primary School, Surulere area of Lagos, under the supervision of the school management and representatives from the District education board.

While speaking with the available newsmen at the event, the Founder and Director of NobelHeart Children Foundation (NobleHeartCF), Mar’yam Thaoban, said close to 500 supplies were distributed to pupils of the school from Three years and above.

She disclosed that the foundation celebrated its fifth year, last December 2021 and was birthed with the focus to care for the young children regardless of their gender, tribe and religion, adding that she had always sought a better means to reach out to them in their numbers.

She said, “The foundation is in operation to tackle and care for the neglected young children. And since inception, we have ensured we own up to our calling by reaching out to these little and pretty future of tomorrow. Let me also use this opportunity to state that we’re still going to have another edition of ‘Dress A Child’ later in the year, most likely in another selected state.”

“Apart from DAC, we have other programmes, including Child Mental Awareness Program (CHIMAP), which focuses on the mental wellness of children. In fact, on May 27th, 2022, we organized a virtual session with the theme “The importance of Child Mental Awareness to a Forward-Thinking Community”. At the course of the program we invited a professional and child counselling psychologist, Mohammed Ademola, the Lead Officer of BlakMoh Consulting, to do justice to the topic.”

She added, “ This is our 5th year of carrying out this particular project “DRESS A CHILD” across 5 states in Nigeria now, in fact, the last exercise was in Lisabi Primary School, Ijoko, Abeokuta, Ogun State, where we had the opportunity as usual to touch lives once more; and the feedbacks from the students and the community were overwhelming.”

On her part, the team lead of the project (DAC), Sumayyah Adefolu said the next mission would be bigger and better than the present, as the foundation is always eager to do more in impacting lives.

She thereby entreat the public to join the foundation in its good ventures as financial situation involves in the project has always been a challenge.

“To be candid, it hasn’t been easy galvanizing for donors and supports from the public. So far, we have received tremendous support from some members of the public but we still need more partnership in term of funds as we extend the program across Nigerian States.” She said.

Sumayyah emphasized that the next edition, coming up later in the year required funding “as it is the only thing the foundation is relying on to make the event become a reality.”

Talking about the distribution process, the founder and director, Thaoban said “ So, we distributed one hundred and fifteen (115) units of panties, seventy-five (75) units of socks, sixty (60) units of singlets, fifty-five (55) pairs of sandals, fifty (50) units of school uniforms and fifty (50) exercise books.”

She added that the distribution was simply fascinating as happiness “filled the minds of the beneficiaries and of course showing all over their faces”.

NobleHeart Children Foundation was founded in December 2016 to promote child welfarism in the country through diverse means – Education, health and socioeconomic with a record of impacting positively thousands of indigent children across Nigerian States.