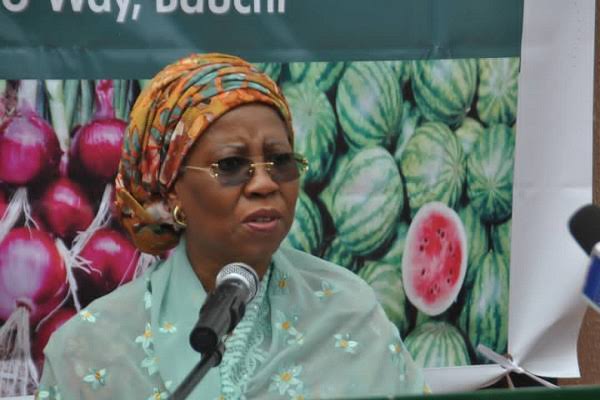 Minister of State for Industry, Trade and Investment, Mariam Katagum, said this at a townhall meeting of beneficiaries of the MSME Survival Fund and the Guaranteed Off-Take Scheme in Abuja.

According to the minister, the programme under the Nigeria Economic Sustainability Plan (NESP) has disbursed the amount directly to the beneficiaries.

She explained that the aim of the meeting is to shed light on the scheme’s achievements in the country and to receive beneficiaries’ feedback on all tracks of the scheme.

The meetings which took place simultaneously in Lagos, Kano, Bauchi, Enugu and Edo, also served as a medium to enlighten the public to the advantages of the interventions.

She added that it resulted into the creation of productive opportunities for MSMEs and provided conditional grants to affected businesses and self-employed individuals who were strained with payment of salaries during COVID-19.

Katagum said that the anticipated impact of the programme was to directly enforce 100,000 MSMEs in the production sector and save 1.3 million jobs, having self-employed entrepreneurs, and micro and small businesses registered in Nigeria as target beneficiaries.

The Minister said that the implementation of the survival fund across the five tracks yielded positive results.

Katagum said the scheme was borne out of the need to stimulate the economy post lockdown, especially for small and medium-scale businesses and self-employed individuals previously gainfully employed.

“The Artisan and Transport Scheme was designed to provide a one-off N30,000 grant to 333,000 beneficiaries.

“We currently have 398,260 self-employed individuals and MSMEs who have benefitted across the 36 states and the FCT,’’ she said.

Katagum noted that the CAC Formalisation Support Scheme had achieved 100 per cent as 250,000 businesses had been successfully registered across the 36 states and the FCT.

“Similarly, the Guaranteed Off-take Scheme (GOS) recorded a total of 37,024 beneficiary businesses out of the target of 100,000 beneficiaries.

“Under this scheme, the off-take items were products such as face masks, hand sanitisers, food items among others from micro and small businesses across the 36 states of the federation and the FCT.

“These items were later handed over to the state governments and the FCT for onward distribution to schools, hospitals, NGOs, as well as other public and private institutions.

“Overall, the fund has disbursed the sum of N66 billion directly to 1,258,183 beneficiaries, including those registered by Corporate Affairs Commission,’’ Katagum said.

She, however, revealed there was a wave of distrust by the beneficiaries at the inception as it required obtaining their details, including BVN.

“The above is closely related to the initial apathy by Nigerians on government intervention programmes as they assumed that one needed to know someone to benefit from the scheme.

“There was a heavy reliance on the use of Information Communication Technology for transparency and traceability, which also, left the programme susceptible to attempts at infiltration by internet scammers.

“There were also instances of multiple applications, using forged documentation, fake beneficiaries, and attempts to bribe officials to bypass the processes,’’ she said.

Katagum urged beneficiaries who failed to deliver their items to do so or face prosecution.

She said “under the Guaranteed Off-take Scheme, 19,928 beneficiaries failed to deliver their items after receiving the 30 per cent mobilisation fee, thereby breaching their contract with the federal government.

“At the national level, we had some deviant cases of 19,928, where MSMEs that were paid the initial mobilisation of 30 per cent for GOS failed to supply the items, thereby negating the bonds they signed with the federal government.

“It should be noted that despite mass text messages (SMS) sent at least 3 times to the defaulters and the opening of a dedicated account at BOI for the refund of the initial sum, many of the defaulters have failed to return the initial amount.

“The steering committee has directed the appropriate agencies to commence the process of recovering such monies and possibly prosecuting the defaulters, as they have blocked the chances of other MSMEs that would have benefited from the Scheme,’’ Katagum said.

Earlier, special assistant to the President on MSMEs and Project Coordinator MSME Survival Fund and Guaranteed Off-Take Scheme, Tola Adekunle-Johnson, said there was initial setback occasioned by initial public mistrust and apathy for the scheme.

He said this resulted in many several applicants abandoning the registration.

Adekunle-Johnson, however, said that it had set the stage for the second phase of implementation where more public interest was shown in the scheme.

Some of the beneficiaries of the survival fund showered praises on the Federal Government for the scheme, noting that it provided the needed relief during the COVID-19 era.